Usually when I post on here, I post all the cute and wonderful things Joy is doing.  I’ve decided to be a bit more honest and present more of the big picture of sweet Joy.

Don’t get me wrong – she is so cute and sweet.  She is one of the most nurturing people I know.  But she can give me a heartache as quick as anyone I know too! 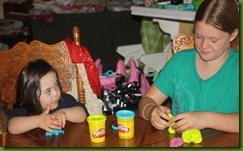 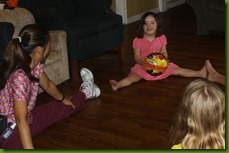 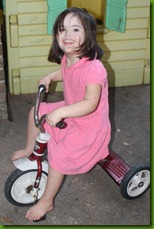 Picking flowers from the garden             Being defiant to the point of throwing herself on the floor and busting her upper lip.  Only to do it again the next morning and bust her lower lip.  She had this funny little pouty mouth for a few days. 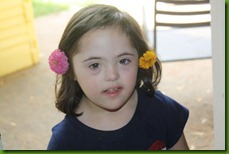 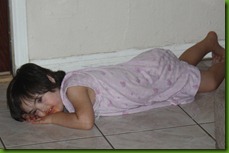 Playing at the mall where she had tons of fun and ran off to parts unknown so many times I didn’t count.  Poor Papa got his workout chasing her through the mall! 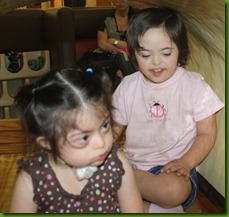 Our back gate which is now padlocked after the neighbors brought her home only in her diaper.  Seriously?  Too many what ifs in my head.  I am constantly panicking and yelling for everyone to stop what they are doing and find Joy.  She has usually just wandered upstairs to play.  My heart gets a great work out stopping and starting repeatedly this way.  Can we say flight risk? 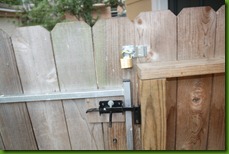 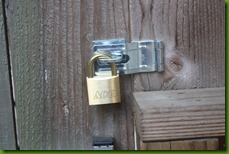 Dumping the entire box of baking soda on the floor – she loved how her toes felt in it!  Being a good mom, we explored that for a bit.  But you better believe I made her clean that up! 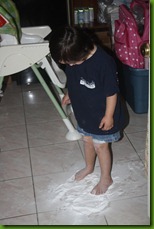 Going to the weather museum – other than in this picture, she was strapped into her stroller.  Why?  Because she was screaming, kicking, and oh, so very done with the museum about three seconds after we got there.

This she loved though!  I cannot get her to STOP cutting her hair!  I hide the scissors, but she’ll still find ones her sisters use.  I took her to JCPenney (free back to school hair cuts in August) and told the lady to do her best.  She gave her a very short little pixie cut.  I really, really am not a fan, but think she did the best she could with what she had to work with! 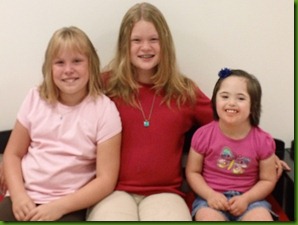 Playing around with puppets at the store, Eating frozen yogurt while she waited for her sister. 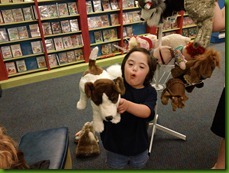 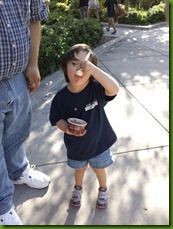 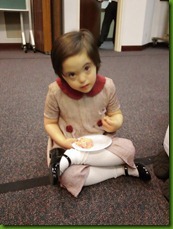 Eating cake at her cousin’s baptism.  She looks so sweet and meek – but this picture was taken after wrestling her for three hours at church.  I don’t know how many times I said, “You have to sit and be quiet.”  Yes, I had things to bribe her with, but she would rather yell and run.  Sigh.  Over time, it’ll get better.  I just have to keep at it.

Other fun things Joy does – she wants to take everyone to the door when they leave.  “I got it!” she’ll yelled and run open the door for our departing guest/therapist/friend/whatever.

She has decided she is old enough to answer the phone.  “I got it!” 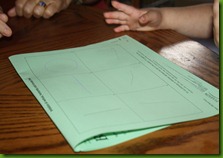 she yells as she dives for the fax phone (which turns off all the other phones) “Hello?” and then gibberish. That one is fun – at least I’m getting  a good workout running across the house.

OT gave her the Beery visual motor test.  She scored between a 2 1/2 and a 3 year old.  We were just grateful she followed directions.

In exciting news, I got her class changed – and I am so excited!  I had asked that she spend one more year in the Early Childhood classroom before jumping into the Developmental Unit (full day, self contained, special ed).  The ARD committee OK’d that, but I was assigned to a new school.  The Diagnostician called to have me register there and I explained how disappointed I was that we had to change schools and that she had the afternoon class.  She told me to call a lady at the District office.  (Side note, I haven’t had the best experience at the District office – truthfully it was only one out of three people that I had to deal with, but she left a really bad taste in my mouth.)  So I wasn’t thrilled or optimistic about placing this phone call.  I got her voice mail and explained everything (poor lady!) how I wanted morning EC because so she could get all of her therapies (she only gets 20 minutes of speech in a group setting at school versus 2 hours each of private PT, OT, and ST outside of school).  I explained my frustration with the school changes.  Last year one school, then this year a different school, then next year she would have to change again because they don’t have a developmental unit.  Three years and three schools is just too many!  A couple of days later she called me back – and she was so nice!  She apologized and said that our population is the group that needs the consistency day after day, year after year.  Three schools in three years in too much for anyone, but especially our kids.  After she said that, I instantly loved her!  She gets it!  Wahoo!  She changed her to another school – but this school has a developmental unit, so hopefully Joy will be there for several years to come rather than the next nine months.  They also have an AM class!!  So everything worked out – morning class in a school that should be our home for the next few years!  Wahoo!      ……………….and…………she told me the teacher has a master’s in behavioral therapy.  My Joy isn’t going to get away with anything!  I really think this is going to be a good year.  She is so ready to learn.  Language is beginning to flow out of her mouth.  Effective discipline at school coupled with what we are doing here, this should be great!  At least that’s my hope!

Posted by Shelly Turpin at 8:42 AM